16 Sep Just Do Your Assignment

Posted at 21:26h in Uncategorized by Jennie Scott 1 Comment

There’s been a whole lot of this in my life lately. 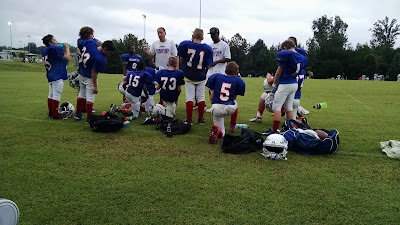 My firstborn – my 6 pound baby boy – is tackling and being tackled. He owns a helmet and knows about defensive plays, and I have to watch as boys built like men drive him to the ground.

Needless to say, my prayer life has changed. 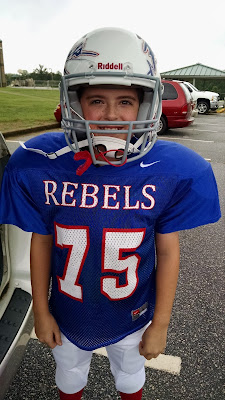 He loves football, but this is his first year. Most of the other guys have been out there before, so he’s had a lot of making up to do. He’s had to learn positions and plays, and he also has what we’ll call a significant size deficit. (He’s a year younger than everybody on his team, so the poor kid is easy to pick out of the crowd.)

At this week’s game, though, this happened. 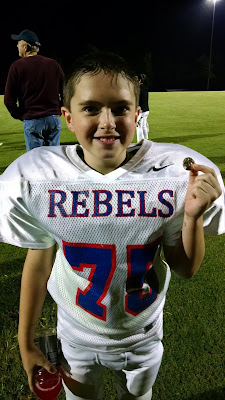 He got one of the two golden game coins. After each game, the coaches choose both an offensive and defensive player to receive recognition. And my baby boy got one.

Now, listen. He didn’t score a touchdown. He didn’t catch a pass. He didn’t do anything for which his name would be in lights.

He just did his assignment.

He was told to block, so he blocked. Play after play, every time he was in, he tried to block whoever was in his path. Nothing fancy, nothing worthy of a highlight reel. He just blocked. He just did his assignment.

When that coach announced his name, though, I swear to you I got a lump in my throat and wanted to yell (but didn’t) “THAT’S MY BABY!”

Isn’t that the goal we all have for our babies? To do their assignments? I don’t know yet what God’s purpose is for that child. I know it’s going to be amazing, and I know it’s going to be specific, but I can’t tell you what it will be. Chances are high his name won’t be in lights, and chances are high he won’t be world-renowned. Regardless, though, I just want him to do his assignment. I just want him to know what he’s been told to do and to do it. Period.

Sometimes I forget this applies to me, too. Just today, I was scrolling through Instagram after work, and I saw post after post of amazing, unique, and attention-worthy things people had accomplished while I was working. It made me jealous, and it made me want to do what they were doing. But you know what? I have an assignment, and my assignment is not what they are doing. For now, my assignment is to cherish and raise up the young adults in my classroom. So that’s what I’m going to do. My name may not be in lights, and I may not be world-renowned, but that doesn’t mean my assignment is any less important.

Sometimes, our assignments must be done in the rain. 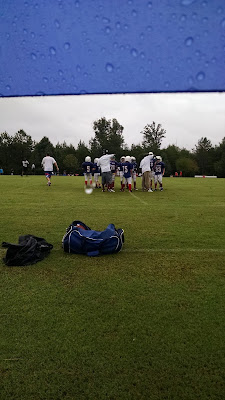 It doesn’t matter what the conditions are. It might be raining, and you might be tired, and you might be praying for the clock to get to the final seconds. The assignment matters even then, and sometimes most especially then. When you understand the importance of the task you’ve been given, you keep going even in the rain. You keep blocking even when you’re tired. And, sometimes, you might just get the golden coin that reminds you your assignment matters.