16 Dec Go Ahead with Your Bad Self

Posted at 03:28h in Uncategorized by Jennie Scott 0 Comments

My sweet little first grader just had her Christmas program at school, and it was Precious. The capital letter is on purpose there, because those crazy little kids were so cute with their missing teeth and gangly legs that I could have fainted from the sheer amount of adorable-ness in that cafeteria. 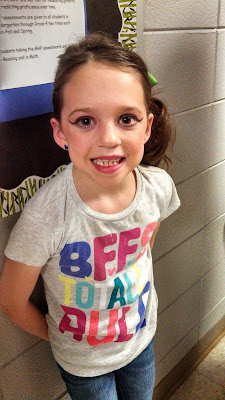 (BTW – [see how hip I am there with the abbreviation? Mom, it means “by the way.“] – this is NOT how she normally goes to school. Eyeliner and lip gloss are for special occasions only, like when your class is supposed to look like rock stars.) 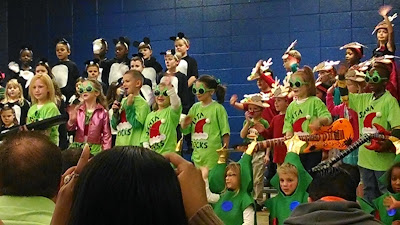 As the program began, the noise level in the cafeteria lessened slightly from its pre-performance roar, but allow me to exaggerate the word SLIGHTLY. There were some loud folks up in there. People behind me were carrying on a full-fledged conversation in normal conversational tones with ZERO attempt to hush their voices. At one point I looked at my husband and whispered (because I have some decorum), “My teacher-self is about to GO NUTS.”

All over the cafeteria there were people who seemed not to care one iota that children – including their own! – were performing a program that had taken weeks of practice, coordination, and planning. These people stood up in the middle of the performance, held iPhones in front of others’ faces to capture shots, scooted chairs across linoleum floors that magnify sounds, and spoke – loudly – to their brother’s friend’s grandma about Lord knows what.

And then, my favorite part of the night.

Mrs. Music Lady, she who had practiced with the children and was trying her best to keep the program going despite the redneckery that was filling the dining hall, stopped. And stood up. And preached.

She let them have it. She said that in 34 years, she had never had to stop a performance, but these children had worked too hard to have their songs go unheard by people who were supposed to know better.

She scared me, and I fell in love with her. I was so proud that for once, someone in education stood up and said, “STOP IT. You should know better.”

I wanted to hoop and holler and do that weird arm motion that Arsenio Hall did.

That night solidified for me, as a teacher, why we have 96% of the problems we do in education. The trees from which the apples fall. The parental units.

Jim Trelease says, “In one school year a child spends 7800 hours at home and 900 hours at school. Which teacher should be held the most accountable?”

I think I know.