25 Jul They Prayed for Paint

Posted at 02:36h in Uncategorized by Jennie Scott 0 Comments
Pastor José’s eyes were rimmed with red as we gathered at the front of his church. We had just finished painting his house, transforming a drab concrete building into a vibrant standout in his barrio. 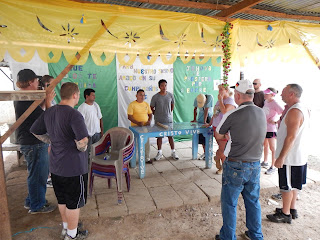 “My family – we gather every morning to pray, and we have prayed for a year to have our house painted,” he explained softly as the translator relayed his words.
I dropped my eyes to the dirt floor of the “Jesus is the Way to Heaven” Church. I have just repainted my entire house, and prayer was not part of the process. The money was in the bank, the desire was in my heart, and that’s all there was to it. I wanted to, so I did.
The humble pastor went on to tell us how his family has prayed for paint, but God did not allow for it until now. “Many people in my country think pastors are becoming wealthy,” he said. I wondered what they would think of American celebrity pastors as wealthy as our athletes.
He told us of how just that morning God revealed to him a lesson about protection. He said that God kept them from having the money to paint it themselves so that others would see the house after our team left and know that the money came from God, not their own greed.
The paint provided a beautiful lesson as well as a beautiful house. 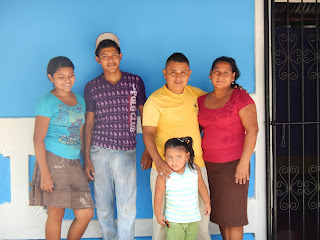 We all bowed as José began to pray, the Spanish flowing from his mouth in the most heartfelt prayer I have heard. His words and the translator’s overlapped, and though I missed some words, I did not miss the Spirit.
The sanctuary had no air conditioning and only dirt for a floor. There were no projectors showing catchy videos, no sound system blaring latest hits. No pens advertising fancy logos, no worship guides to fill in.
But make no mistake – it was worship.
I wiped away the tears that would not stop as I thought of how wrong I – we – have been. Pastor José prayed for a year for what we deem simple, and I give up after mere days on what is important.
As the prayer grew in intensity, the wind began to blow. The yellow plastic decorations that hung above our heads began to rustle, and I knew it was the Holy Spirit in our midst. I cannot explain what I felt as we gathered in that place, but I know that it is a place God has blessed.
Pastor José’s church continues to grow, with people bypassing other houses of worship to attend there. Their previous location was destroyed by a drunk man wielding a machete, but the congregation now knows that God allowed its destruction for a purpose. Doesn’t He always?
I did not want that moment to end, a moment when the Lord’s glory came down and was palpable, but as all such moments in this life must, it did. We wiped away tears, hugged the gentle pastor, and assured him of our continued support.
Friday, we will leave this place, having painted some walls and played with some children. We will return to our state of the art church facility and our own luxurious homes. We will reenter our daily lives, demands returning and needs pressing.
But we will not forget. We will remember standing in the shadow of a volcano where the Spirit erupted, touching our hearts and reminding us of His love.
Post Views: 4,212
Share
Print page
0 Likes
Poverty Is Not Just Physical
Why Teaching Is So Doggone Hard