13 Nov The Truth about Quicksand

Posted at 22:30h in Uncategorized by Jennie Scott 0 Comments
Who would have guessed that quicksand can be holy ground?
For anyone who has suffered a great loss or intense pain, doesn’t it feel sometimes as if the very earth on which you’re standing has become unstable? The tremors of a personal earthquake rock your once-firm footing, and you reach out for something – anything – to hold you fast. A deep chasm forms before your very eyes, and you feel yourself slipping towards its gaping opening…
You know your demise is imminent and that the infinite darkness before you is your final destination.
The quicksand holds you immobile, and try as you might, you cannot get out. 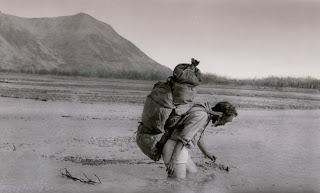 Photo by Bentley B. Fulton, National Geographic
The enemy of our lives and souls wants us to believe that the difficulties we face are impossible to survive. He wants us to feel the shaking soil and panic, not believing that a Rescuer is on His way. He wants us, in the midst of the trial, to focus on the grip of the quicksand and not the Hand reaching down to save.
And I fall for it, nearly every time. I feel the pressure, sense the unsteady floor, and believe that all is lost. In a moment of anxiety, I struggle to remember that nothing can snatch me from my Father’s hand (John 10:29).
I recently read a fascinating article about quicksand and humans’ ability to survive when trapped. The truth is that no amount of quicksand can pull a person completely under. Humans are less dense than quicksand by about half, and the lowest a person will sink is to his waist. Why, then, does there exist the misconception that quicksand will drag you to your death? Because struggling against the force of the quicksand causes its viscosity to increase, thereby increasing the difficulty of getting out. In other words, the sand sediment becomes ‘thicker’ the more you try to escape.
Experts say, “’The force needed for someone to pull their foot out of quicksand at a speed of a centimeter a second would be the equivalent of that required to lift a medium-size car. So how do you get out? Don’t ask your friends to tug on you; they’re likely to pull you ‘into two pieces if [they] try hard to pull [you] out,’ said Bonn, a physics professor at the Van der Waals-Zeeman Institute at the University of Amsterdam. ‘The way to do it is to wriggle your legs around. This creates a space between the legs and the quicksand through which water can flow down to dilate [loosen] the sand,’ he explained. ‘You can get out using this technique, if you do it slowly and progressively.’”
Does anybody see where this is going? Can I please get an amen?!
Better. Thanks.
The quicksand – that trial, pain, looming hardship – cannot kill you, and struggling against it only ensnares you further. Your escape can only come from an outside source! The only solution to viscous quicksand is water, and the only solution to your problems and mine is Jesus. He is the water to our quicksand. God can and sometimes does pull you right out of quicksand, but He often removes you “slowly and progressively” so as not to ‘pull you into two pieces.”
Psalm 46:10 is quoted so often we lose its meaning, but doesn’t it make perfect sense in this context? “Be still and know that I am God.” Be still – your attempts to escape this on your own are only making it worse. Be still – let me come to your aid, because you cannot fix this on your own. Be still– I am the only solution; all other methods will be in vain and will postpone the rescue.
The hardest act to take in the middle of a battle is to lay down your weapons and allow someone else to assume the defense, but Exodus 14:14 says, “The Lord will fight for you; you need only to be still.” Your role is, out in the middle of the crushing quicksand when your senses tell you that you will surely not make it, to be still and believe. Do as Jesus instructs in Luke 8:50 – “Don’t be afraid; just believe…”
Hebrews 12:28 tells us, “Therefore, since we are receiving a kingdom that cannot be shaken, let us be thankful, and so worship God acceptably with reverence and awe.”
The kingdom cannot be shaken.
Cannot.
There will be earthquakes in our earthly lives, but His kingdom will not be shaken. The quicksand will try its best to crush us, but His kingdom will not be shaken. Our flesh will tell us that the end is near, but His kingdom will not be shaken.
His kingdom will not be shaken.
“Be still and know…”

All information taken from Quicksand Science: Why It Traps, How to Escape by Nicholas Bakalar for National Geographic News. September 28, 2005